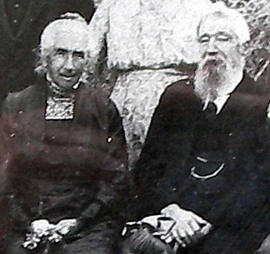 Alexander & Jemima had 6 children, Jemima or Mina and always known as Ma to all the boarders.

Amy who married ….. Wright who was killed overseas during WWII. 1 child.

Iris who married Alan Wykes (spelling not accurate). No children.

Ronald (Ron) who contracted polio and never married but lived to 38 yrs old.

Vivian (Viv) who married Belle Robertson. 4 children. Viv had a twin who only lived a few days.

Alec & Mima raised 4 of them. The names I have don’t seem to coincide with some of the ones I know. Burt Chalmers (Ian’s dad) and Percy Chalmers (Arthur’s dad).

I can remember all of Alec & Mima’s children quite well except for Aunty Sissy who I can only just remember. I can’t remember Tom her husband but I am told I met him. 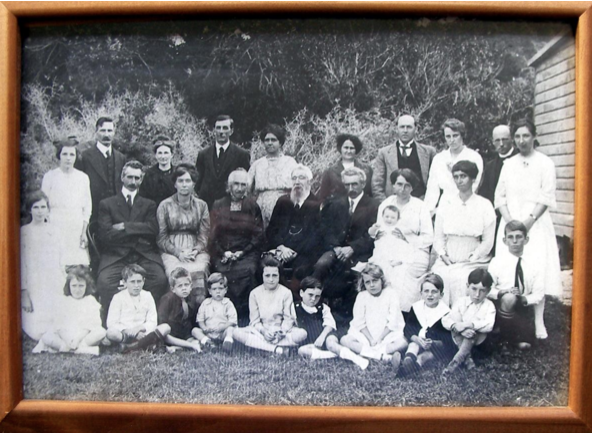 A short bit of useless history. Whenever the family got together all the men and women hugged and kissed, however Tom Logan also kissed all the men as well. At Lola’s wedding, Vern had just come back from the war and was sitting in front of Mum & Dad and Steve & Alma. Tom had not seen Vern since he had gone overseas in the army. Tom coming into church saw him and came along the pew and gave Vern a great big smacker on the lips. It was the talk of the wedding. Mum said Vern’s ears, face and neck were bright red from embarrassment. Now, there’s a bit of useless information for you eh.

It is my intention in doing this to give you some good useless information, OK?

Another bit. Len, one of the younger of them, when he got off the steamer with his parents went up to Granma all excited and asked where Merve and Steve were. She thought they were up by the plum trees. She was right but she didn’t know they had been saving up a dozen rotten eggs and as he came round the corner, they pelted him with rotten eggs. He got the sulks and went and got into Lina & Lew’s bed. The rod was used.

One more story. Ronny Avery couldn’t walk till he was 8 or so. There was a boarding house picnic to Anchor Beach. That meant the crowd went on the boat Leisure-hour over to Waikare Bay, unloaded the crowd and they walked across Takatu to the ocean beach for their picnic.

Dad was 5 yrs older than Ron and Uncle George told me (with tears in his eyes) that he was going to wait at Waikare with Ron. Merve said, no you won’t, I’ll piggy back him and he carried Ron right across to the beach and back. One 12 and one 7.

Uncle George never forgot that. These are some of the people we came from.

I loved Uncle George. He always had a story to tell. I might put some more in later. I was actually born in his house in Kingsview Rd, Mt Eden.

Both Uncle Charlie and Uncle Lew had a lot of fun in them. Lew had a very dry sense of humour.

Charlie worked in a ware house but used to do a lot of preaching during the depression with the down and outs. St David’s Church had an outreach referred to as the branch and Uncle Charlie preached a lot there. Dad boarded with them when he was at Seddon Tech. Vern tells the story of Merve and Ed. They went to the branch at night and St David’s in the morning. They preferred the branch, but suffered St David’s in the morning. There was a lady who used to go to St David’s that wore a hat with feathers on it. One morning Ed and Merve sat behind her and during one of the prayers, cut the feathers off with a pair of scissors. Uncle Charlie enjoyed the joke but Aunty Maud was horrified.

One story Uncle Lew told me. He was a fitter & turner all his life for the railways. He told me how they actually built a locomotive there. When it was finished they took it for a test run. A lot of the guys would go out to the toilet for a smoke and a rest. Uncle Lew’s words were “the foreman called out to the driver,” take her around past the toilets Bob, so those guys can see her too”. Mind you, he said he didn’t use the word toilet and he laughed and laughed about that.

He was always amused about Aunty Lina always talked about bird skite on the window. “Look Lew, those birds are skiting on the window”.

She was getting a little hard of hearing and thought the boys were saying skite where in fact it was shite. He never enlightened her and he and Vern used to say to her, any bird skite on the window Aunty Lin and then laugh away about it.