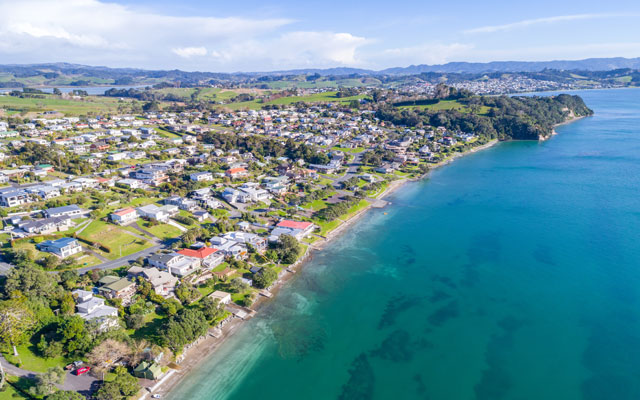 Excellent safe swimming for 3 hours either side of the high tide with good sand up to the sea-walls on both sides of the main boat ramp. 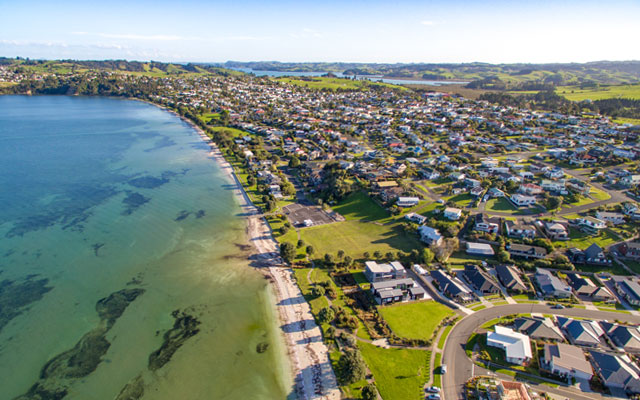 Good safe swimming for 2 hours either side of the high tide, however it is very flat and the water goes our for some distant towards the low tide. 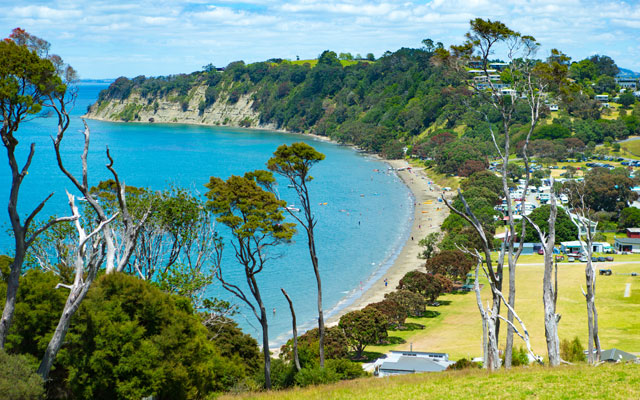 Excellent safe swimming for all tides and being more exposed can get a small swell which creates ideal small waves for children with body boards. 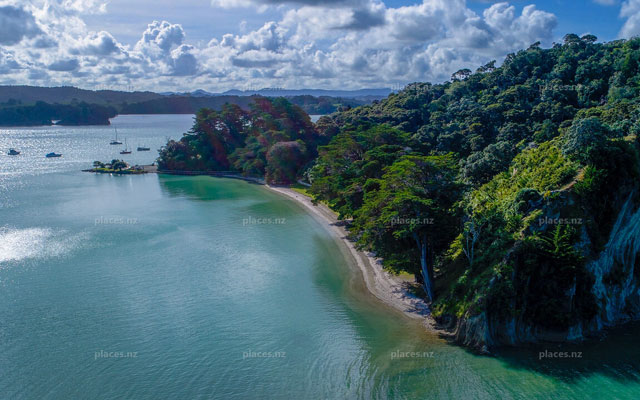 Excellent safe swimming for 3 hours either side of the high tide. 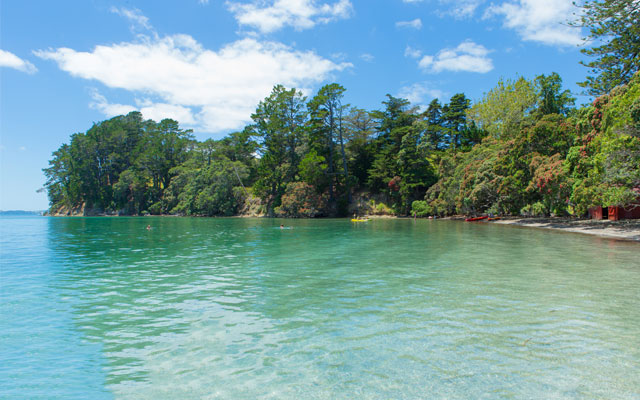 Excellent safe swimming for all tides. 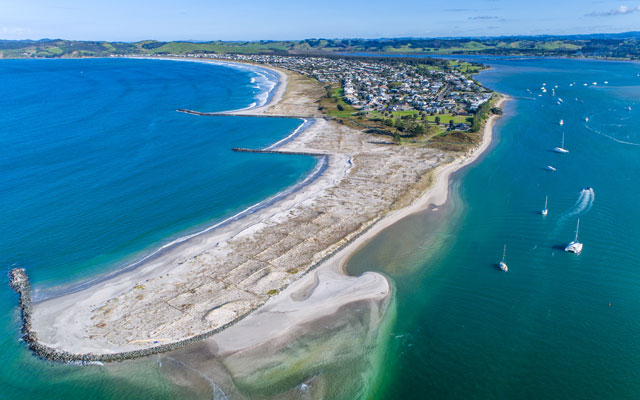 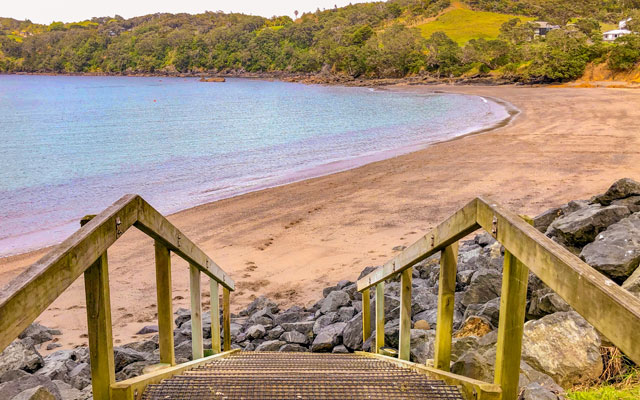 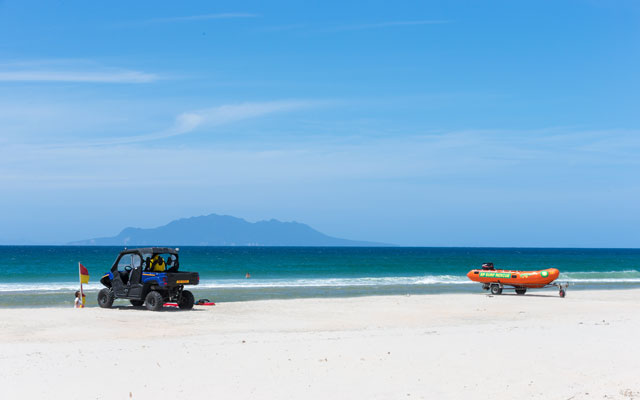 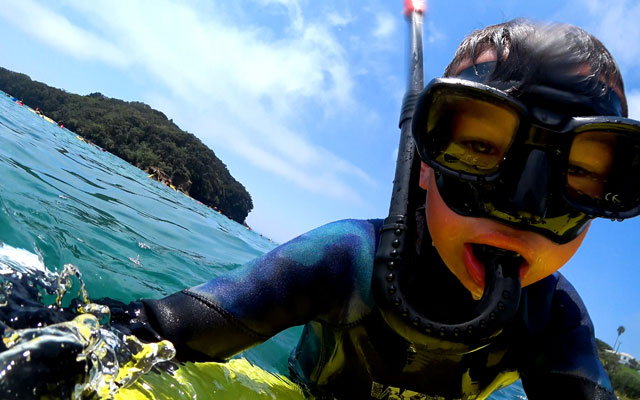 View More Beaches around this area

Check out our local info.

The picturesque mouth of the Puhoi River, surrounded by forested headlands, is Wenderholm, the first and perhaps still the most beautiful Regional Park.  Wenderholm contains one of Aucklands best examples of mainland coastal forest.

A stunning piece of coastal land at Pakiri was purchased in late 2005. The 52 hectare piece of land includes 900 metres of sandy coastal foreshore and stands of inspiring mature coastal pohutukawa trees.

Mahurangi park protects three peninsulas at the mouth of the historic and picturesque Mahurangi Harbour. Mahurangi spans across the Puhoi River, north of Wenderholm, and along Te Muri Beach to Sullivans Bay and Mita Bay.

Donkeys living at Highfield Garden Reserve began Nov 1969, with the arrival of Tilly, purchased by owners of the land, Ted & Alison Roberts. The donkeys were to carry loads for their farm/gardening projects, as well they would be an interest for the visiting youngsters along with keeping the grass under control.    Donkeys are social animals and Tilly was soon followed Toby.  The donkey’s names all begin with a T, acknowledging Ted whose inspiration they were.

When the land at Highfield was gifted to the people of NZ, Alison continued to look after the donkeys. After her death and with the blessing of the Roberts family our local community formed an Incorporated Society to take ownership of the donkeys and a new era began.

The amalgamation of Rodney Council to Auckland City meant new systems had to be organised.  Negotiations began between the Council and the Society re the welfare and responsibilities of the donkeys, bearing in mind the gift of Highfield land along with aspirations of Ted and Alison that the donkeys would remain at Highfield   A Memorandum of Understanding between the Council and the Community was negotiated and signed on 23rd January 2014.   Local Board Member Steve Garner and Peter Couling Chairman of Highfield Donkey Incorporated Society both signed the historic document.

With Community support and help from Auckland Council, the donkeys at Highfield will continue to roam as in the dream of old.   The donkeys enjoy offerings of carrots, apples and silverbeet as treats.   The Community is encouraged to enjoy the Reserve and the donkeys, but are reminded that the donkeys are wild animals and must be respected and care must be taken particularly with small children. 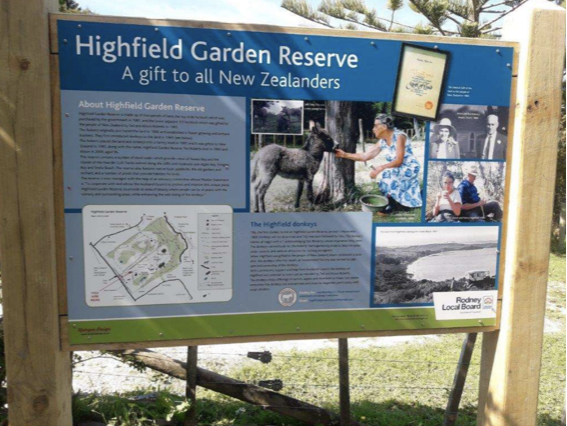 We have 32 dinghy racks available for hire, situated beside the Alexander Rd boat ramp.

To keep the Bay and beach a safe area for children and adults, we encourage everyone to be mindful when using these public spaces.
Please be careful when using vehicles on the beach
Patience on the boat ramp, especially during the busy times.
Keep your speed under 5 knots until you have passed the yellow 5kt buoy.
No swimming around the ramp where boats are being launched.

Ski lanes are for access only to the offshore 200 meter mark and skiers should not ski across or in the lane unless going out or coming in.
Ski boats should go out on starboard and return on starboard ie the lane operates anticlockwise from the beach.
Towing boats have right of way – so boats waiting to depart should give way to a boat coming in to drop off their skier .

Use these access lanes when departing or approaching the beach if your vessel is travelling at more than 5 knots.

You must observe the 5 knot speed rule at all times unless towing.

All ski boat drivers must be over 15 years of age.

Any vessel towing a water-skier must have on board an observer in addition to the driver. 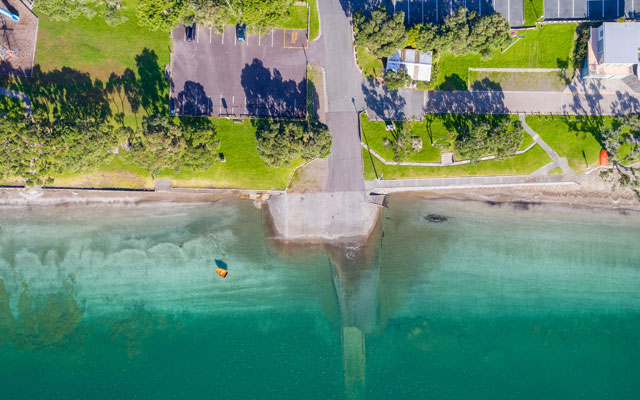 Algies Bay Boat ramp is Suitable for launching with out a tractor about 3hrs either side of the tide. Otherwise a tractor is recommended. 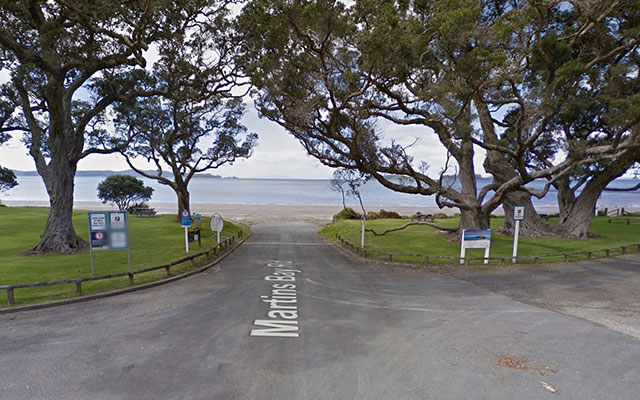 Martins Bay is a preferred boat launching spot in Mahurangi, as it has good access to great fishing spots, and it is a little more forgiving with the tides, This Boat Ramp has good parking for trailers, there is toilets and out door showers close by. 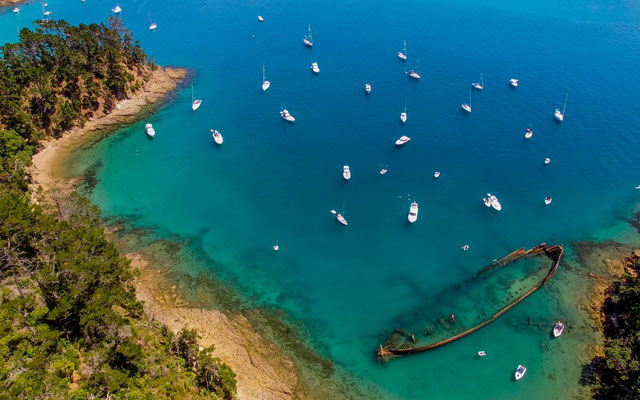 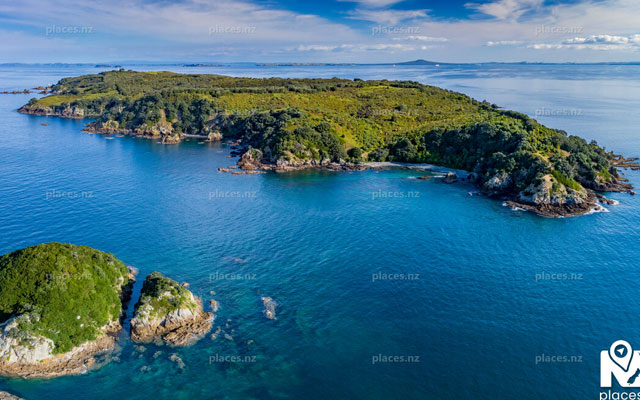 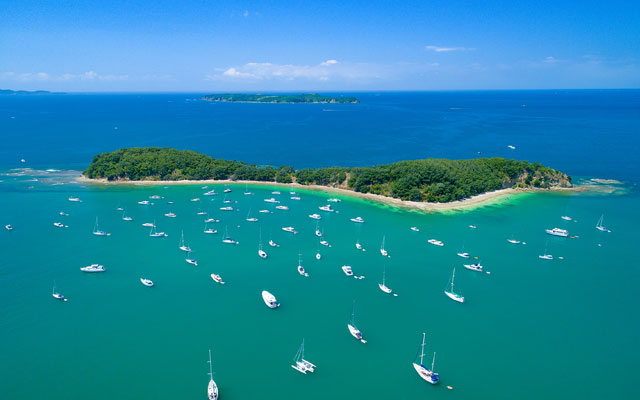 View More Islands around this area 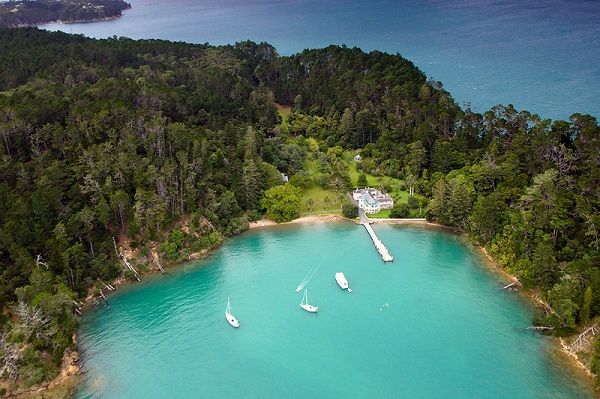 This beautiful Island, once owned by Sir George Grey (Governor Grey) is accessible by boat or water taxi from the Sandspit wharf. 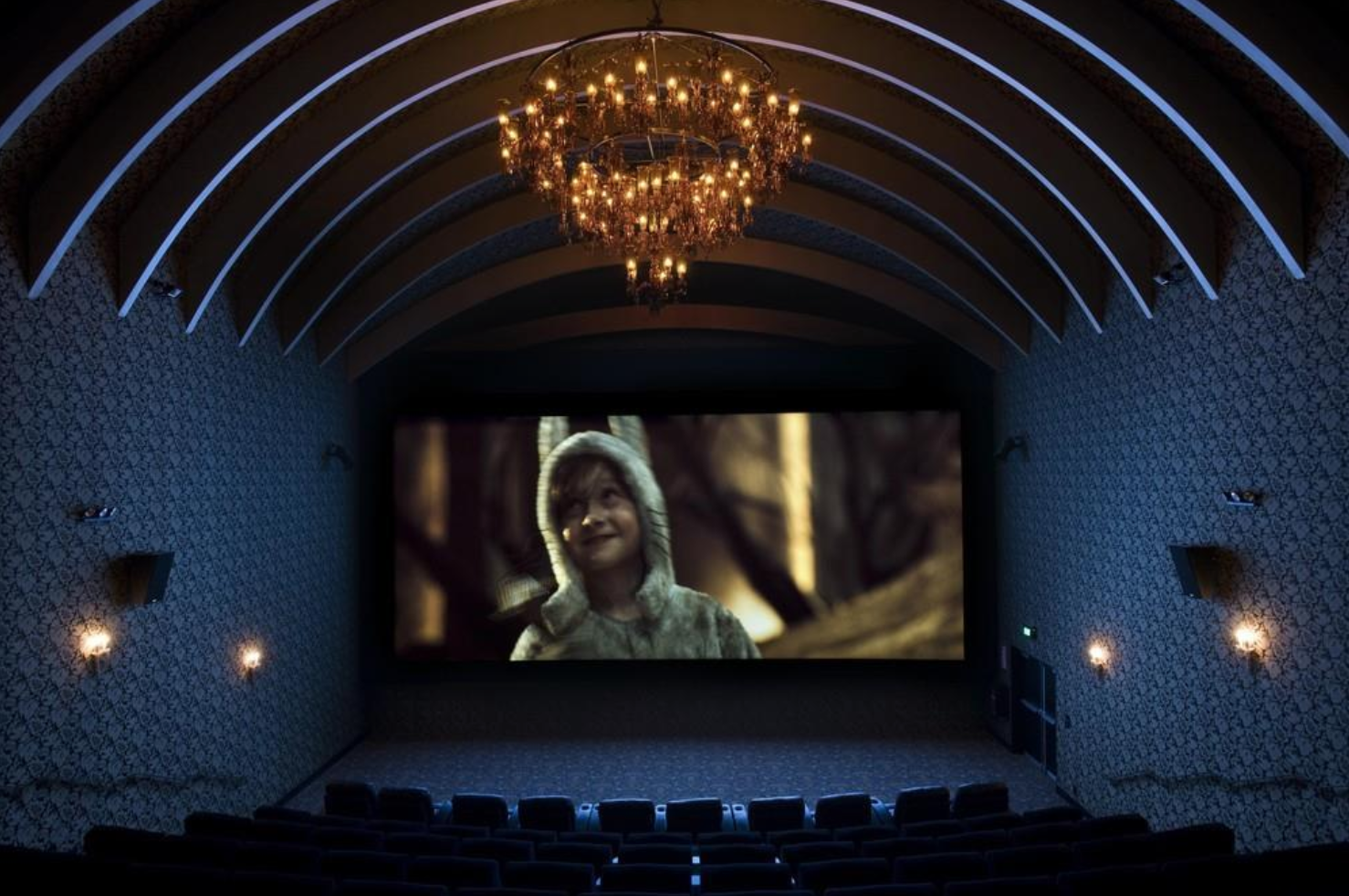 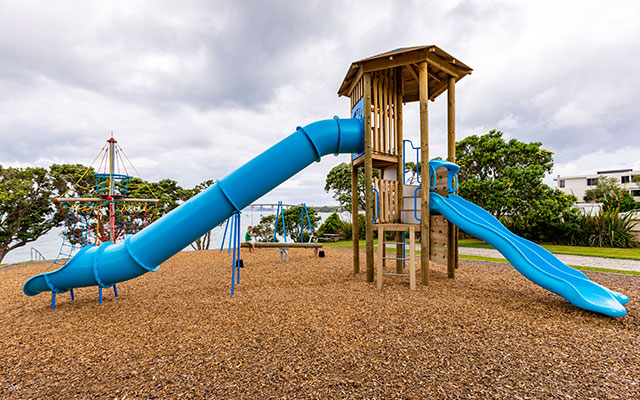 Algies bay playground is beachside, it consists of swings, slides, seesaw, climbing frames, pitonk, a grassy area to run around or play ball, the fall zone is bark. For more details visit places.nz 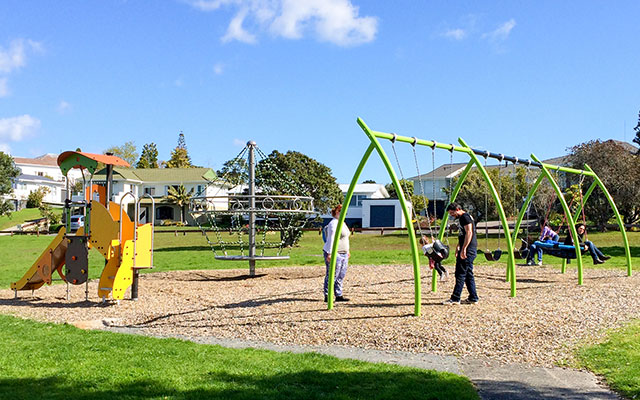 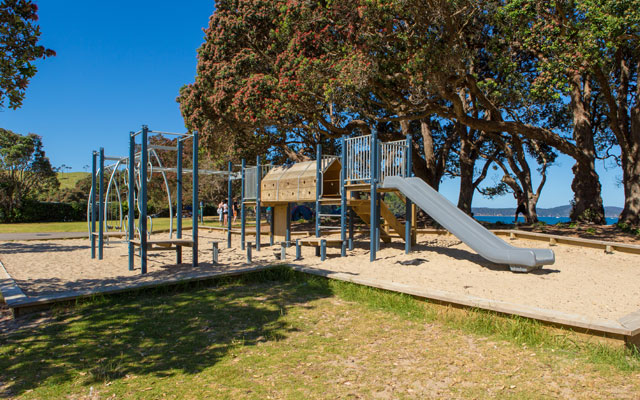 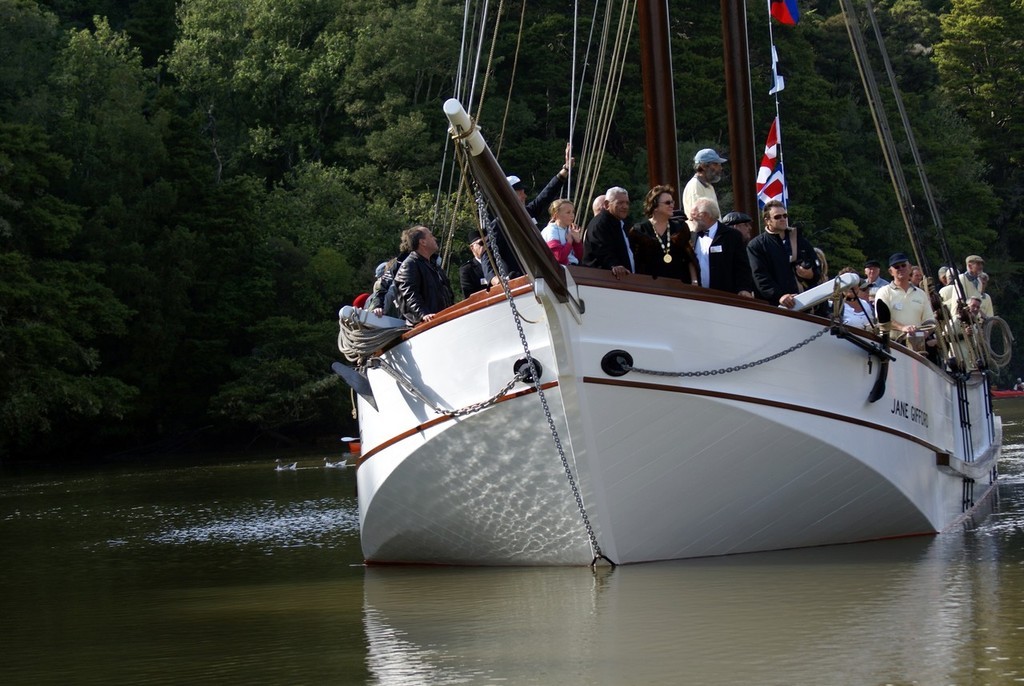 The Jane Gifford was built in 1908 by Davey Darroch, at Whangateau, initially to cart granite from mines in Coromandel to Auckland. She is 19.8 metres length on deck, has a 6 metre beam and a displacement of 60 tonnes. Based in Warkworth from 1921 to about 1938 she was used to cart shell from Miranda in the Firth of Thames to the cement works on the banks of the Mahurangi River, Warkworth. For a number of years she also carted road metal from the Public Works department Quarry at Motutara Island to Warkworth, for building roads in the area. She was also used to transport stock to and from Great Barrier Island and occasionally to Little Barrier Island.

She was moved to the Tamaki River in Auckland from about 1938 in search of work and in later years was owned by Subritsky Shipping. She was acquired by the Waiuku Museum Trust in 1980 as a powered barge and taken to Waiuku on the Manukau Harbour to be restored back to sail.

She was rebuilt and launched in about 1992 and operated for about seven years until she no longer passed survey because of rot in the old deck and hull. A new macrocarpa deck had been laid over the existing kauri deck and fresh water made its way through the old deck. Together with the lack of ventilation rot developed.

In 2001 a new Jane Gifford Trust bought the vessel from the Waiuku Museum Society and moved it to Okahu Bay. Sufficient money to repair the extensive damage could not be raised so restoration work stopped. Then in 2005 a number of Warkworth residents purchased the Jane Gifford to save the near derelict vessel from ‘extinction’ and moved it on a house-moving trailer back to Warkworth.