This is an account of our family history as best as I know it. It is not in chronological order necessarily, but it will give future generations a pretty fair idea.

Alexander Algie (known as Alec) was born in Renview, Scotland, on 28th March 1838 (100 years to the month before me). He arrived in New Zealand in 1862 where he worked in the bush around Thames and Coromandel with his brother Samuel (known as Sam or Uncle Sam) who later with his wife Elisabeth Spears (known as Aunty Sam), came to live at Martins Bay. They are buried at the heads cemetery. Alec worked for John Spence Deerness from about 1863 or 1864 and that’s where he would have met Jemima. Alec Algie married Jemima Deerness in 1866. She was known as Mima and I think she ruled the roost.

We won’t go into the Deerness’ now as we will look at them later on as we will the Stevenson’s and the Roose’s, OK? Except to note that the name was Dearness and changed to Deerness shortly after they came to New Zealand.

Late in 1866 or ’67 Alec and Mima staying in Auckland on their honeymoon and he was up the top of Queen St, which was just a dirt road with the odd house, shop, blacksmith etc, and it came on to rain. There was a shed with some people in it and he went in to shelter from the rain. A property went up and no one bid so he thought, oh well, I’ll just throw a bid in and start the bidding. His was the only bid and he said to the auctioneer, where is this place. I don’t know; ask them down at the wharves. He found out, left her with her parents and came up to Mullet Pt on the cutter and with the help of some local Maoris he built a Nikau whare where he and Mima spent the first year of their marriage. 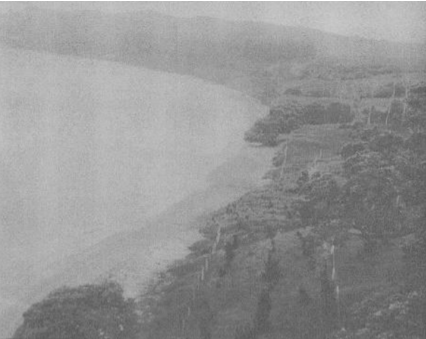 Jemima’s 2 nd brother William Spence Deerness (known as Bill) like his father (James, known in Pukekohe as Jim) and his older brother, was a carpenter. They built the church at Pukekohe East and John Spence Deerness gave the land.

William came up and built the cottage which was altered in 1956 by Merv Farr and Merve & Steve Algie and a few other hangers on at the baches in the boarding house.

Lindsay Farr actually owns it and most of the timber was from the cottage.

The internal walls had no studs. They were 9×1½ (225 x 35) rough sawn Kauri laid on edge on top of each other like so (drawing supplied on original manuscript). Then scrim and newspaper, 4 rooms fairly basic. And back door bench. Wood burning fireplace. Jemima’s sister, 3 years older than her, died and Jemima and Alec brought 4 of her children up.

I’ll just note here that Merve and Steve Algie built a launch called the Mera and her side decks were made from those 9”x 1½” boards.

A Nikau whare was built a few meters away from the house and Jack & Will and I think the 2 older Chalmers boys slept out there.

Jemima kept ducks and chooks and each week when the cutter and later on the steamer came, the eggs went to the Auckland markets and later on the cream went once they got some grass and cows.

Alec worked in the bush at Pakiri with his brother, Sam, who had purchased land at the southern end of Martins Bay.

Alec also became the Mullet Pt postmaster and held that position from May 1877 to 1923 when John Deerness Algie (Jack) my grandfather took on the job as the telephonist and postmaster until we got the telephone and the rural mail in 1949. 73 years. I have the document when it was signed 1924.

The original block was only 50 acres and Jack & Will brought it into grass and started farming it when they left school age, about 12 to 14.

Will worked for Alec’s brother, George Algie, on his farm in Taranaki. Jack went down later on but only lasted 2 months and got homesick and came back and milked cows and ran the farm, while Will spent 2 or more years with his uncle.

About this time Alec could see the 50 acres would not keep all the family so he went to Auckland and signed up for the point at the southern end of the bay. This went up and across where the Martins Bay Road now is.

Jack & Will broke this land in. Jack was the farmer; Will was the carpenter, mechanic, inventor, plumber, painter etc. Dad (Merve) often told me Will should never have been a farmer; he would have made a wonderful engineer.

I once asked Merve & Steve if Jack & Will ever argued or had disagreements. Both of them said never ever. They never ever had a harsh word or a clash (not bad, eh).

They both had a very strong Christian faith as did their farther Alec and his brother Sam and also Wallace.

Sam’s favorite song or hymn is written on his tombstone. Jesus signals still. Part of the chorus of Hold the Fort (a song written in the American Civil War when a group of solders were under siege and signaled for help and the answer came back “Hold the fort for I am coming general?”.

Will’s favorite hymn “O Christ in thee my soul has found” etc. Now none but Christ can satisfy, none other name for me, there’s life and love and lasting joy Lord Jesus found in thee”.

Dad never told what Alec’s was but Alec led the singing before they got an organ.