How ever you’re spending your Lockdown, we hope it’s going well for you.
With the improving weather and loosening of Level 3 restrictions, it’s good to be able to do some more of the things we enjoy.

As it is now Wasp season, we have included in this Newsletter information on Wasps – how to identify and control their spread.

It is disappointing to report several occurrences that have happened during the Lockdown period. They have been: beach party on Stingray Bay leaving bottles/glass to be cleared away; damage to the public toilets twice – the gate padlocks being broken and a party held inside, plus willful
damage.

Don’t hesitate to contact the Warkworth Police on 425-8109 if you see something that’s not right.

The current rules can be viewed by clicking here.

A temporary change to dog access rules at Snells Beach will come into effect on August 27th 2021 and remain until March 28th 2022 and these can be viewed by clicking here.

We have attached a Subscription Form if you choose to post your payment (PO Box 12, Snells Beach, 0942) or it can be given directly to a Committee Member.

Membership is important as it provides considerable strength for our Association when dealing with Council and other statutory bodies. If you have not received this Newsletter as an email, please contact us at: admin@algiesbay.co.nz so we can add you to our contacts list. Being on our contacts list guarantees your receiving all our email communications relating to the Bay and surrounding district. 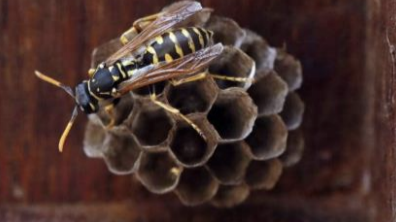 Paper wasps – eat protein (i.e., meat) – namely all insects. Make small nests of around 20 insects’ often on fences, under eaves or in flax.
Can be destroyed by spraying with household fly spray. Spray nest – best results are in the evenings once wasps have returned to nest and stopped flying. Then come back and cut off after making sure all wasps are dead. Paper wasps collect wood from dry dead wood and often can be found in numbers collecting wood. Spray and retreat! 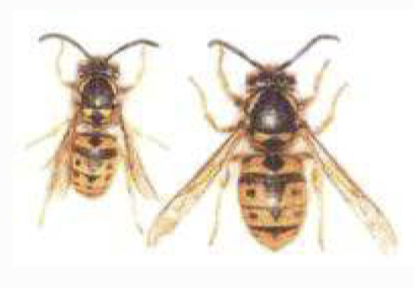 German Wasps – Worker wasps are smaller than the queen wasp. Kill the queens from September to January

Eat protein and love sugar. Note the striped face and larger yellow stripes on the body. They can attack young native birds in their nest and kill them. They also take food away from NZ native species and kill native insects and moths hence the need for control. Over winter you may find hibernating queens in areas such as folds in BBQ covers or in woodshed piles or bricks. Often on North facing areas. In September and October one can often see a larger wasp (the longer striped body) against windows and often in garages or sheds. These are queens looking for a new nest. These can be killed using fly spray and then crushing (as some fly sprays are just knock down not kill).

Killing ONE of these potentially stops thousands of worker wasps a few weeks later!!!

Once a nest is established worker wasps can be very dangerous. If you are stung by just one worker wasp it triggers a pheromone and there is a risk that hundreds of wasps could attack or swarm out to defend their nest.
They nest in ground, in logs, banks, older tree hollows, under your house, in the eaves and sometimes in forks of trees. The nest will have multiple entrances so DO NOT use water or petrol as these can lead to an immediate and potentially serious wasp attack on you from the other entrances. If you see them flying in and out of a hole in the ground on public land or see a nest, call Council Pest Control on 09 301 0101. If on private land contact a pest control organisation or your local resident’s association: admin@algiesbay.co.nz . Another form of control is to use a protein-based bait (Vespex) that is specifically designed to destroy German/common wasp nests. You may wish to look at using this system if you are the property owner or contact the residents and ratepayers’ association who may be able to assist with finding a certified applicator. Never use sugar-based baits to kill wasps as these will attract and kill bees and maybe birds! Or if you prefer to use a simple hanging wasp trap to attract and kill common & German wasps, then always consider baiting the trap with a product that does not risk attracting bees (like meat).

Bees are our Friends! 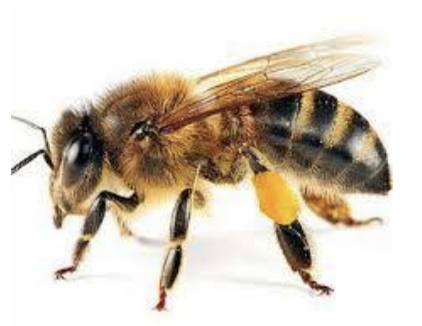 This is a honey bee, our best friend! They are shorter, have shorter antennae and are fatter and hairier than wasps. They have black bands and smaller yellow strips and fatter wings than wasps. Some are all black and these are our native bees. Bees commonly have yellow pollen blobs on their legs, wasps don’t.

Yes, they can sting, but they die if they do and so they will only sting in desperation. We need bees to pollinate our flowers and fruit trees (namely they eat nectar not insects). The wasps and other environmental factors are killing them and this is a major concern. 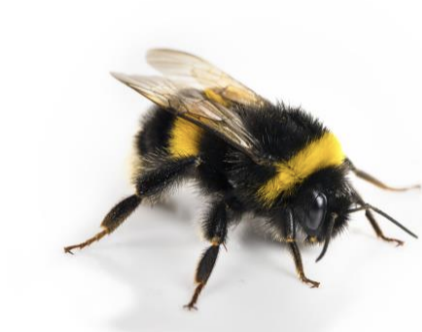 This is a bumble bee. They are fatter than the others and also a great friend to humans as they are terrific pollinators (namely eat nectar). They live in football sized nests in the ground of around 100 bees per colony. They will sting but are very reluctant to do so unless their nest is disturbed or attacked. Also, in decline due to pesticides.

The Association manages the dinghy racks located  by the Alexander Road ramp. If you are  interested in renting one of these racks (cost:  $25 per year), please contact us at:  admin@algiesbay.co.nz